A new report has been published by the International Transport Workers Federation (ITF). This report, A One Way Ticket to Labour Exploitation, focusses on the transit visa system for recruiting foreign fishers. It is aimed at immigration and fisheries policymakers. 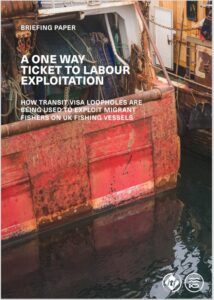 Transit visas are the starting point for the labour abuse of migrant workers working in the UK fishing industry. This type of visa is intended to allow seafarers from other countries to board ships in UK ports that then depart into international waters.

Fishing vessel owners have been allowed to misuse this visa in employing migrants, taking them fishing into international waters (more than 12 nautical miles from the UK coast) to fulfil the transit requirements but then bringing them back to a UK port to live on board the fishing vessel. They argue they are allowed to
do this under current rules but, at best, it is a loophole that needs closing

The report argues that transit visas are the starting point for a cycle of abuse, and that the system needs to be changed to close, what is seen as a loophole.

Several recommendations were made to reform the system.